The serious fire hazards of lithium-based batteries to aircraft

Lithium-based batteries have become the power source of choice because of their energy density and affordably priced raw material. No wonder they are so popular among producers and users of renewable energy, mobile devices and electronic consumer products. These batteries carry a tremendous amount of energy despite their size. However, they can also combust instantaneously, and that presents aircraft with a serious fire risk. This is a problem in the aviation industry for years. Three years ago we also published an article about how fire-resistant cargo containers increase safety for aircraft, crew and passengers. However, this issue unfortunately still becomes more relevant every day. That is why we wanted to publish a new article with our latest insights in the hazards lithium-based batteries pose to aircraft.

Current fire suppression systems on board aircraft are not yet capable of tackling these lithium fires. Yes, they can extinguish the flames of lithium-ion batteries. What they cannot do is stop the temperature of the lithium cell from rising, and it is this which can lead to a “thermal runaway” and an unstoppable chain reaction. Fire can then spread to adjacent cells, other cargo and eventually throughout the aircraft itself.

Annual global sales of Li-ion battery cells (one type of lithium-based batteries) are expected to grow exponentially over the next 20 years (Figure 1). It is estimated that their market value will increase from €24 billion in 2017 to about €65 billion in 2025. Global production will see an unprecedented growth across all market segments due to the rise in sales of electric vehicles (EVs), the main consumer of Li-ion batteries (Publications Office of the European Union, 2018).

At the same time, there is a worldwide trend in commerce that sees a shift from traditional local retail to global e-commerce. Figure 2 shows the rise of e-commerce over the past few years and its estimated growth in the years to come (eMarketeer, 2019).

There is no data available on the quantity of lithium-based batteries being shipped by air freight, largely because it often goes undeclared (see below). However, the trends identified above reveal the growing importance of Li-ion batteries specifically, and lithium-based batteries generally, to global e-commerce. That increases significantly the risks to which all aircraft are exposed.

In order to ensure the safety of those transporting lithium-based batteries (both lithium-ion and lithium-metal) by air, sea and road, four pieces of UN legislation have been drawn up. Consequently, lithium batteries are classified in Class 9 – Miscellaneous dangerous goods as:

Packing and labelling regulations for the transport of lithium-based batteries have become much stricter in recent years:

Bulk shipments of lithium batteries must be declared as dangerous goods according to UN 3480/3090. A fire resulting from this type of bulk cargo would be classified as a Class D fire (i.e. a fire that has ignitable metals as a fuel source). Such fires lead to explosions and are basically unstoppable in an aircraft. The declaration of these hazardous shipments allows carriers to take the necessary precautions.

Many lithium batteries are transported by courier services such as DHL, FedEx or UPS. Sent as either express mail or package, they’re usually part of an e-commerce transaction but may also be non-commercial. Most shipments should be declared as UN 3481/3091, but failure by the retailer or private individual to understand or comply with the regulations (e.g. misinforming the authorities on the watt-hour rating) means this is not always done.

For airlines, is it impossible to be completely sure that all lithium batteries on board have been declared.
The risk posed here isn’t the lithium-fire itself, rather the ignition of the surrounding cargo. Such an event would result in a Class A fire (i.e. a fire of ordinary combustibles such as wood, paper, cloth, rubber and many plastics). That’s not a problem for the Halon fire suppression system on a lower deck, but it’s a catastrophic situation on a main deck.

The number of smoke, fire, extreme heat or explosive events on and around aircraft involving lithium batteries has risen sharply in recent years (Figure 3). The FAA states that this is not a complete listing of all such incidents. For example, it doesn’t include three major aircraft accidents where lithium battery cargo shipments were implicated but not proven to be the source of the fire: An Asiana Airlines 747 near South Korea on July 28, 2011, a UPS 747 in Dubai, UAE on September 3, 2010 and a UPS DC-8 in Philadelphia, PA on February 7, 2006 (FAA, 2020). 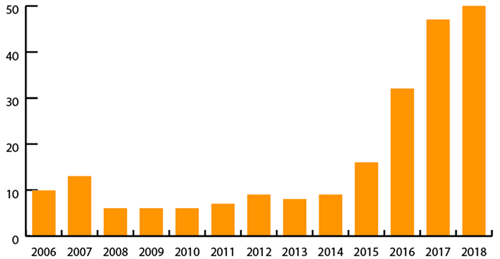 Even so, it is worth noting that the vast majority of these incidents involve undeclared shipments of UN 3481/3091. In other words, lithium batteries contained in equipment that can ultimately result in a Class A fire.

How to prepare for undeclared lithium battery shipments?

Why this test? It is designed to combat fires from undeclared lithium batteries and gives the crew enough time to make an emergency landing, no matter where the plane is when the fire breaks out.

A fire-resistant container (FRC) can protect against an aircraft fire

We keep it fireproof
Go back