The Air7 is the first ever inflatable solution for Unit Load Devices on the market, and it is ready for certification. We are convinced that users of the Air7 will see their competitiveness improve significantly. “Current methods of relocating ULDs are expensive and time consuming,” explains Geert van Riemsdijk, Managing Director of VRR. “But a container that can be collapsed quickly and easily and then stacked seven high on a lower deck is a game changer for fleet managers. That’s really going to help them cut costs and increase capacity. And then we have not even discussed the cost saving when it comes to storage of the containers”.

Just like its prototype, the Air7 is inflated in seconds and automatically takes shape as an AKE container using mere air pressure. Air is released to collapse the container, which takes just two people and less than two minutes. Despite the impressive space saving measures (up to seven folded Air7 containers fit in the contour of a single AKE container), no concessions have been made to the robustness, strength or safety of the structure.

The prototype of the inflatable AKE was revealed at last year’s WCS in Singapore. The Air5, as the prototype was called, demonstrated the considerable potential of inflatable ULDs, including their ability to help resolve the global air cargo imbalance on many trade lanes. We have been overwhelmed by interest from around the world ever since. The innovative inflatable AKE Unit Load Device even won Inter Airport Europe Excellence Award [video]​ at Inter Airport Europe 2019, in the category interDesign.

The positive feedback has spurred us on to bring its solution to market. The Air7 has several improvements over the prototype:

“We are now at the stage where we can involve our customers and discuss real-life testing,” says Ben Lakerveld, Sales Manager at VRR.

Additional features of the Air7

In addition to developing the 'regular' Air7, VRR is also working on incorporating other features such as a fire-resistant and thermal cover. These additional, optional, features will make the Air7 either a fire-safe or an insulated container, which will be able to transport dedicated cargo. Ben Lakerveld continues, “We are exploring these options since specialised cargo, like perishables and lithium batteries, are mostly transported on imbalanced routes with one-way direction freight. The collapsible feature of the Air7 would definitely benefit specialised freight carriers.” 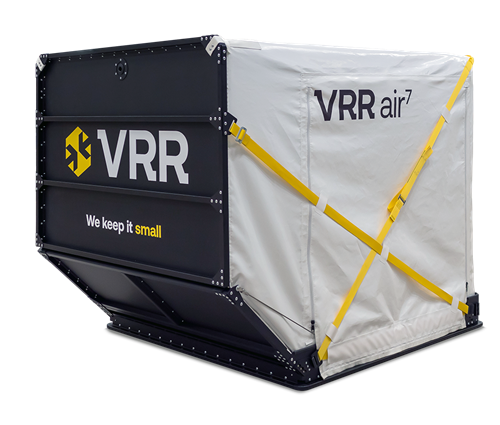 We expect the final certified Air7 to be available by Q3 2020. The Air7 will then be available for test series. For more information about the inflatable Air7 container, or if you would like to be involved in the test phase of the Air7, please contact a VRR specialist via info@vrr.aero or sign up for ​our mailing list to make sure you won't miss any future update about this product.